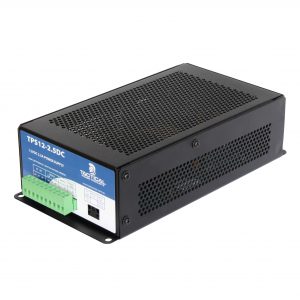 TPS12-2.5DC provides switchmode regulated 12.4Vdc at up to 2.5 Amps via its primary output channel (to power loads such as voltage sensitive CCTV cameras), with a separate 13.8Vdc 700mA channel to keep your standby battery charged – making TPS12-2.5DC a 3.2A supply.

In the event of a 240V mains failure, TPS12-2.5DC automatically re-regulates the 13.8V standby battery voltage to 12.4Vdc – ensuring that sensitive equipment is not subjected to higher, potentially damaging voltages.

Incorporating short circuit and thermal overload protection, TPS12DC models have been designed and thoroughly tested to comply with stringent Australian & New Zealand Electrical Safety and EMC standards – in fact, TPS12-2.5DC models have such low conducted & radiated emissions that they comply with the extremely demanding CISPR11:2004 Class B standard, making them suitable for use in not only industrial installations, but domestic, scientific and medical applications.