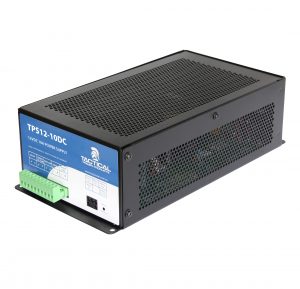 The advanced design of the TPS12-10DC provides outstanding performance in the field, whilst maintaining significantly low operating temperatures due to switch-mode design.

The TPS12-10DC models have been designed and thoroughly tested and comply with  AS\NZ Electrical Safety Standard 60950.1.2015 and EMC standards CISPR 32-2015 Class B, making these suitable for use in domestic, commercial, industrial and hospital installations.

TPS12-10DC features very low noise at full load with overload, short circuit and over voltage shutdown protection and is configured with a High Output battery charger. In the event of a mains power failure, standby battery voltage is re-regulated to 12Vdc, ensuring that voltage sensitive loads (such as some CCTV cameras) are not subject to higher than expected voltage. A removable 10 way connector provides outputs for DC Load, Battery Charger, Mains Fail Relay & Low Voltage / Battery Fail Relay Output. Equipped with an AC fail relay and Green LED indicator which changes state upon loss of 240V AC mains power, the low battery relay and Red LED indicator are only functional during a mains power failure and will operate when the battery voltage reaches 10.5V.

This supply is designed to operate at full output from 0-50’C without derating and does not require  additional heat-sinks or fans to meet stated specifications, relying only on convection cooling.